Looking around for ideas to help heal the national trauma that was the Civil War, Philadelphia Mayor Morton McMichael floated the idea that the United States Centennial in 1876 be celebrated with an exposition in Philadelphia.  Philadelphia, after all, was the birthplace of American democracy. What better place to showcase the modern nation the United States had become? 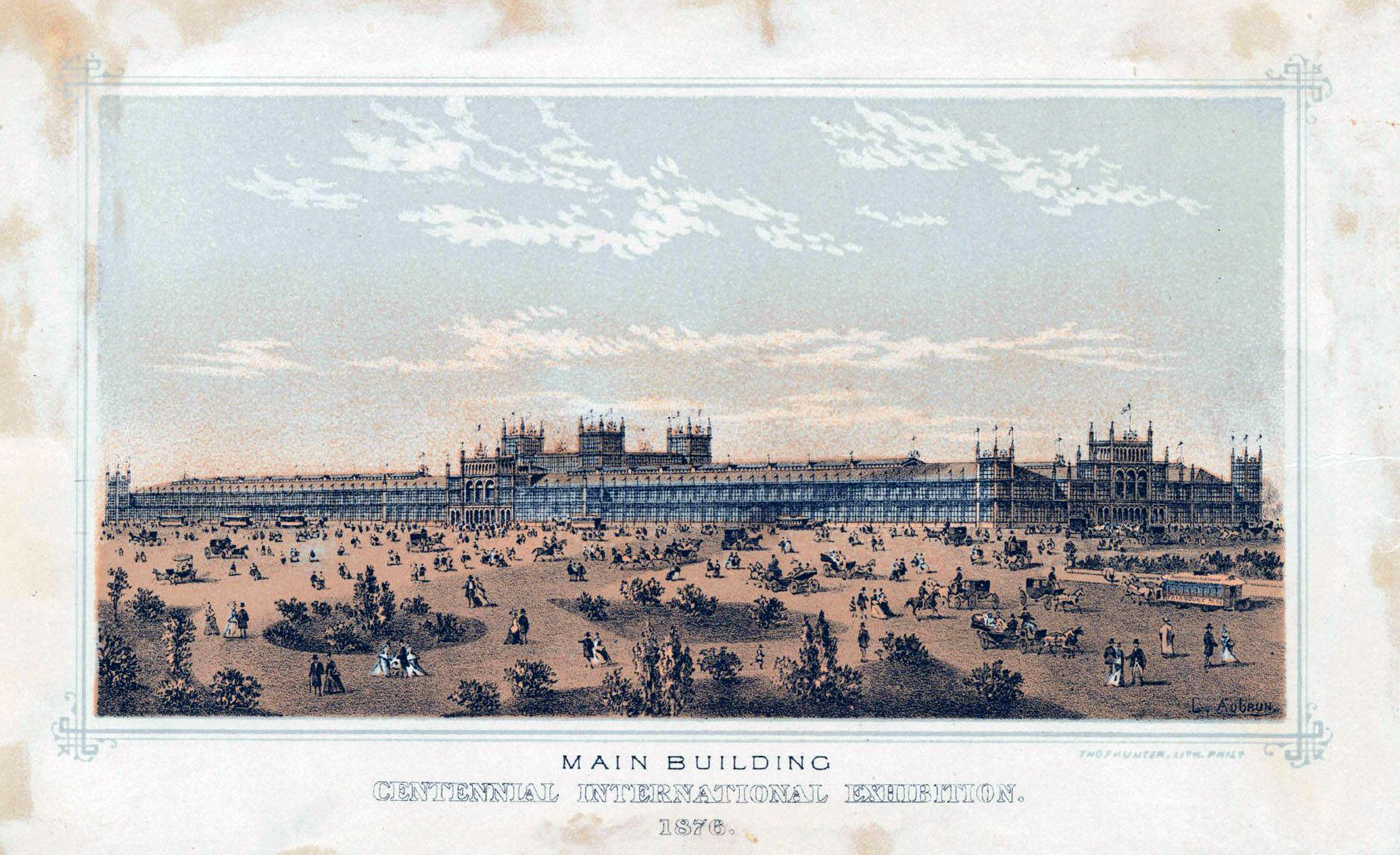 Others were not so sure. They doubted the funding could be raised; they worried that other countries might not attend; or that American exhibitions might compare poorly to those of other nations, especially the magical Crystal Palace Exhibition of 1851.  Still, the idea gained traction, and with millions of dollars raised, and a 450-acre site set aside for the Exposition, the stage was set for an event the likes of which America had never seen. The undertaking was enormous: over 200 buildings were constructed on the grounds, including the Main Building, seen in the colored engraving above, which enclosed 2.5 acres, making it the largest building in the world.

Other huge halls were devoted to developments in agriculture, horticulture, and machinery. Individual American states each built typical houses. 16 foreign countries built national pavilions.  There was even a Women’s Hall, which showcased advances in domestic technology.

In today’s video age where almost any image or information bit is available at a key-stoke, it’s hard to appreciate the effect that a fair of this scale had on the  public imagination. This was many Americans first introduction to electricity. Alexander Graham Bell’s telephone debuted here. As did the typewriter, Heinz Ketchup, and Hires root beer. In hindsight, there were a few advances that we could have done without, such as the introduction of kudzu to the US as a means of erosion control.

Also present were many arms manufacturers, like Germany’s Krupps, that hinted at the world of mechanized warfare to come. But in general, the effect was dazzling, and marked the entry of the United States onto the modern world stage. Before the 6-month exhibition ended on November 10th, 1876, more than 10 million people had attended, or about a quarter of America’s then population of 40 million.

All fine and good, you may be thinking, but what’s this have to do with Southborough history?

Well, swept up by enthusiasm for the progress their country had achieved, and desirous not to be left out of the excitement, the students of Peter’s High School held an “International Exposition” of their own at the Town Hall on the day before the official Exposition closed in Philadelphia. 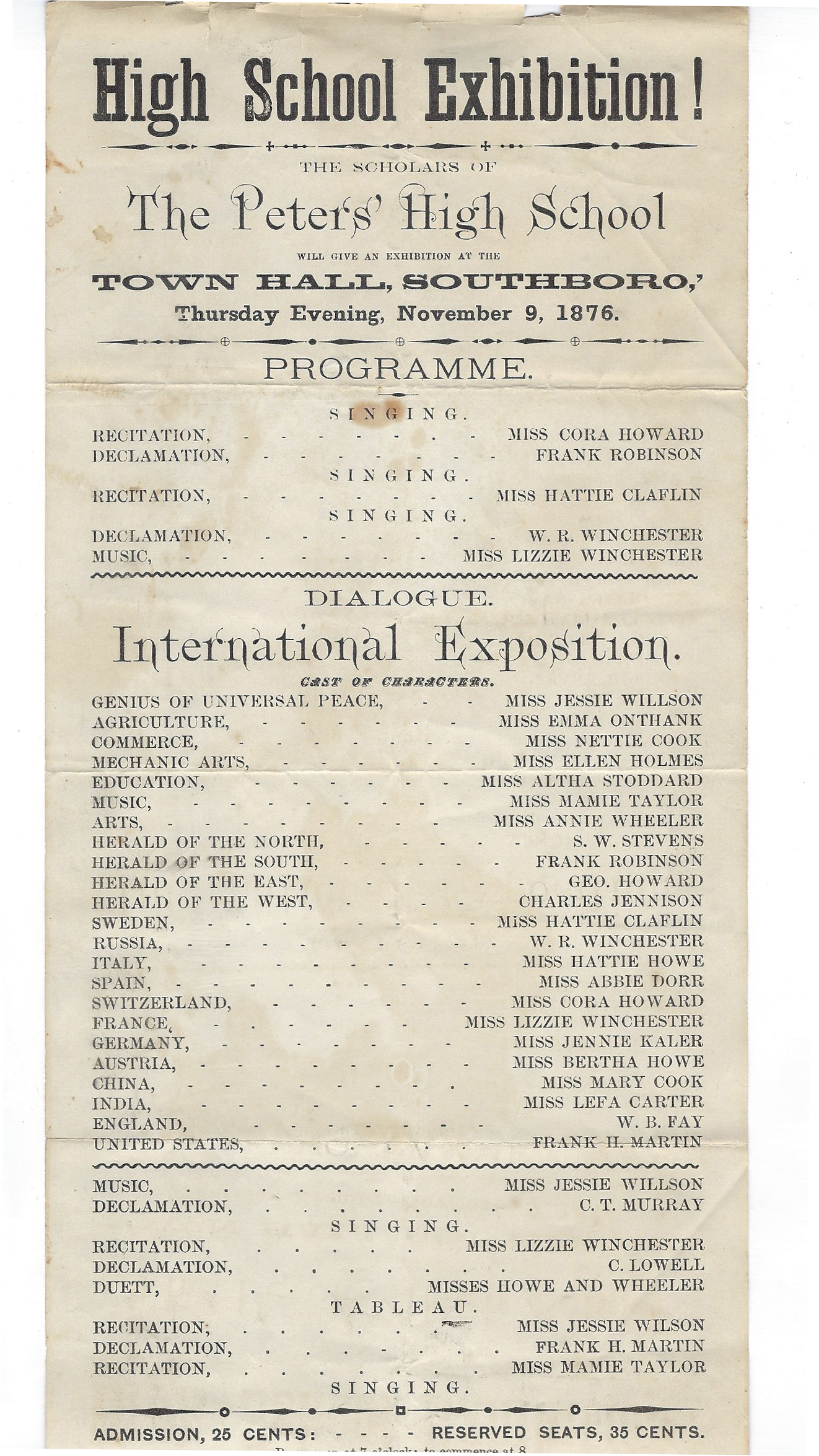 Unable to replicate the glories of the fair in exhibits, they instead chose to celebrate the event with song and words, with individual students portraying in verse the themes of the various halls and pavilions, others creating representations or tableaux vivants of the foreign countries that participated at Philadelphia. Tickets were 25 cents, no small amount in those days, and while no documentation exists describing the particulars of the show, it must have been charming, because even across 150 years,  the excitement these students evinced at the dawn of America’s second century  still echoes from this marvelous program—another of our recent discoveries from the basement

Unfortunately the 1970s remodeling of the Town Hall took out the large second floor stage, seating area and third floor balcony used for this celebration, but still it’s pleasant to remember an age when going to the Town Hall might mean something more than attending long public meetings or paying taxes.

To read more about the remarkable Centennial Exposition, click HERE

2 Replies to “The International Exposition: Southborough, 1876”