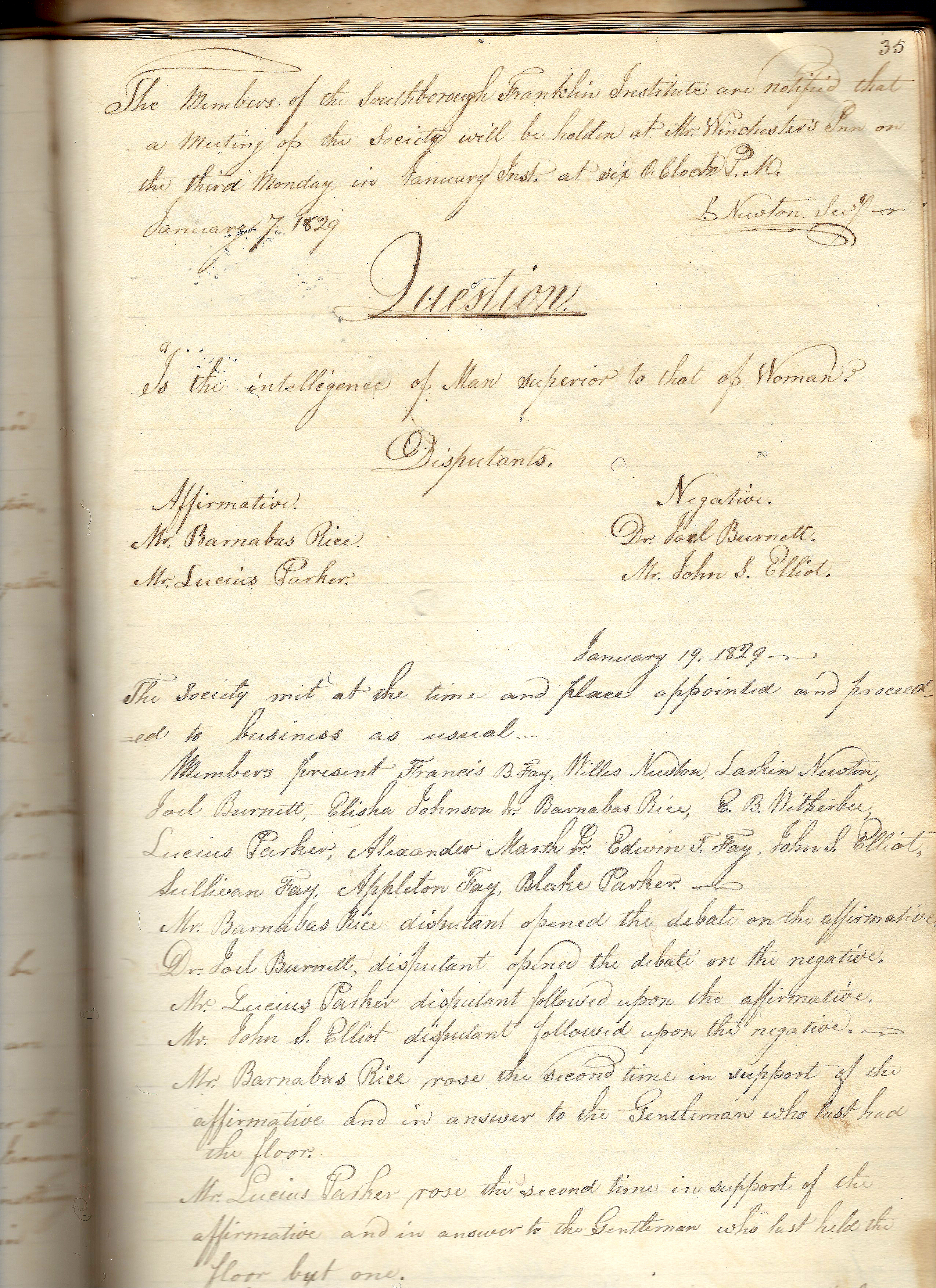 So yesterday, as I was moving a pile of  boxes in the basement, still struggling to produce some semblance of order after our forced removal last year, I spied an uncatalogued carton labelled “School Papers.”

I eyed it dubiously, wondering if I should stop to look inside. It is SO easy to get sidetracked here for hours, and I was on a tight schedule.

But curiosity got the better of me, so I cleared off a spot on the basement table, and pulled up a chair. Amidst crumpled notices of 1950s Fay/Peter’s  graduation exercises and an early brochure for Algonquin Regional, I pulled out two cloth bound-books,  ledger shaped, roughly 6″ x 14″. At first I thought they were more store account-books (of which we have many) but then I opened one and began to read the flowing script on the front cover:

“The diffusion of moral intelligence and scientific research upon the exalted principles of Philanthropy is, or ought to be, the anxious desire of every heart devoted to wisdom…”

Instead,  as I read further (and became totally sidetracked as I had feared) it turned out to be the meeting record of a group formed on New Year’s Day, 1828: the Southborough Franklin Society, with the soon to be famous Col. Francis B. Fay (the future founder of our town library) its first president.

So what was the nature of this club? Intrigued, I continued reading the spidery cursive. HOLY SMOKES!!  It was a debating society! Like Oxford, England, but here in Southborough!

It seems the  the group assembled twice a month to debate a chosen topic. Members were assigned to argue for and against, and then after both sides had made their cases,  the assembly voted yea or nay.  On the page I’ve chosen to illustrate above, the question for January 18, 1829, was: “Is the intelligence of man superior to that of woman?”

Hmmm. We’ll get back to that in a moment, But first, why all these exclamation points in my description?

I cannot begin to describe to you what a valuable social history document  this book is!!!!

Instead of just dry old financial figures, or land deeds, it contains the well reasoned thoughts and opinions of  actual inhabitants of 1820s Southborough! And, as it turns out, these people were hugely sophisticated thinkers at a very cosmopolitan level — all the more surprising  for a remote farming village that at the time that was a  grueling day’s travel from  anywhere of consequence.

Just read some of the debate topics:

Wow! Wow! WOW! This is the equivalent of receiving a time-warp message from an 1828 focus group!!!!

So enough exclamations: I’m sure you now share my excitement at finding such a rare piece of Southborough history.  But to return to the beginning: what do you think was the answer to the first question, the one about the superiority of man or woman?

Well, it turns out the men of 1820s Southborough were truly savvy: having invited  guests of the gentler sex to that particular meeting (not their normal practice), they very wisely opted to let the women present decide. Result?

“The women decided by ballot that the intelligence of woman is equal to that of man.”

You heard it here first: women equal to men, Southborough 1829!

Oh, by the way. I earlier mentioned TWO books….

Stay tuned. It gets even better…

7 Replies to “Newly Discovered Treasures from the Basement”