If you’ve ever spent a moment in the parking lot behind Town Hall, or in the playground near the old Town Pound, you may have noticed a somewhat forlorn tree at the edge of the pavement. This battered survivor is the remaining testament to the Historical Society’s 1977 Lyscom Apple Project, which sought to return this historic variety to Southborough to celebrate the 250th anniversary of the town. Of the 32 trees specially grown and planted throughout Southborough, this  is the sole survivor, making it possibly the oldest living thing in Southborough. How can that be, you ask? Well, it has to do with how apple varieties are propagated. Apple trees are not native to North America. The first trees were grown from seed carried by early European settlers to this area. Each seed produced a different kind of apple. Most of these new varieties were inferior to their parents, but occasionally a grower would find a tree with particular merit, and name it. Then, through the process of grafting scions, or shoots, onto apple rootstock, exact duplicates of the plant could be created. “Duplicates” is not precisely the right word here, as really, each “new” plant is simply a part of the original. That’s how our friend behind the town hall is so old — it’s a living piece of the original tree grown by Samuel Lyscom 300 years ago.

The name Lyscom rings large in local  history, as Samuel Lyscom was one of the signers of the petition to separate Southborough from Marlborough in 1727. During his lifetime he held every office in the new town and, and eventually became a judge. He was also Southborough’s second representative to the Colonial legislature. Lyscom married twice and had ten children. His eldest surviving son John sold the Lyscom farm (presumably with its orchard of Lyscom apples) in 1772 to Josiah Fay. The exact location of the property isn’t known, though it is assumed to have been in the vicinity of Chestnut Hill Road. Over the years, the original tree continued to be grafted, until the Lyscom apple became a common site in Southborough and the towns around Boston, as we learn from an 1889 book published by Deacon Peter Fay, who was a prominent farmer with an intense interest in fruit culture:

In the fall of 1834, at the Worcester Cattle Show, I carried 2 barrels of Lyscom’s apples and hired a boy to sell them in front of the Old South Church. They were very large and quite a throng of people collected around the boy. Some men from New Braintree call them Mathew’s Stripes, but the true name was Lyscom. The original tree stood on a farm owned by Samuel Lyscom 130 years ago. The reason they were called Mathew’s Stripes was because a man by the name of Mathews (John, I think) went from Southborough to New Braintree about 100 years ago and took with him scions of this variety. 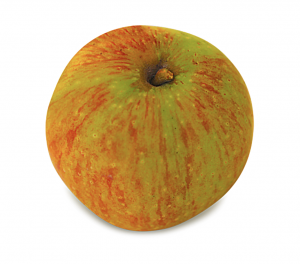 The Lyscom apple – with its distinctive large fruit streaked with yellow – was last recorded as being grown in Southborough about 1917. Miss Mary Finn (of Finn school fame) remembered seeing a tree along Flagg Road, where the apples would fall into the path and be eaten by the cows. Probably others survived too, until a Depression era WPA program eradicated “wild” apple trees thought to be a source of disease for commercial growers.  Fortunately, a few avid collectors in the 1950s began to rescue old varieties, and a Preservation Orchard was founded at Old Sturbridge Village in 1973, which is where the one sole surviving example of the Lyscom apple was discovered by members of the Southborough Historical Society. From this, 32 new trees were propagated, and carefully spread throughout the town to the celebrate the 250th. Unfortunately, rather than giving them to longer-lived institutions, they were mostly distributed among then-members of the Society, and over the years have fallen victim to development, disease, decay and destruction until now there is once again only one left.

So to celebrate the 300th anniversary of Southborough in 2027, the Society has decided to try this project again, albeit a bit differently. In conjunction with our dedicated Director of Public Works, Karen Galligan, this spring we will take grafts from the Town Pound tree, but this time we will distribute them to organizations as well as individuals, with the goal of having bushels of Lyscom apples available for our 300th anniversary celebrations. If you are interested in adopting a tree, be in touch as we’re taking names for 2019 delivery. (Yes, 2019, things move very slowly in the tree world, but if you are Lyscom apple, you already have learned plenty of patience.)